The latest Transformers game asks a very serious question: What happens when one group of giant robots gets super-angry at another group of giant robots, and they start fighting each other all over the world? It’s a question you can let the game answer for you in the story mode, but if you’d rather take things into your own hands, you can answer that question for yourself in this third-person shooter’s competitive multiplayer mode. 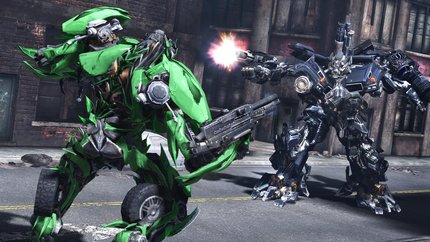 Dark of the Moon’s multiplayer is going to be familiar to anyone who played the most recent Transformers game, War for Cybertron. There’s a leveling-up system, unlockable abilities, and a fair amount of customization as far as your character goes. The big difference here, of course, is the game’s setting. War for Cybertron was an original story set on the alien world of Cybertron, whereas Dark of the Moon is based on the upcoming movie in which Shia LaBoeuf and company travel the earth witnessing the continuing fallout between Autobots and Decepticons. The two multiplayer maps we played in Dark of the Moon couldn’t have been more different: a devastated Chicago and a picturesque South American village.

Like in War for Cybertron, there’s a class system that lets you choose different vehicle types, ranging from cars to jets. Each has its strengths and weaknesses. The jet is good for zipping around wide-open maps like Chicago, but its relatively low combat abilities make it better suited for Conquest mode, in which you’re trying to take over capture points. Then there’s the tank, which is great for smaller maps like the South American map and does well in the game’s Deathmatch variants (team and free-for-all) thanks to its sheer brute force.

Beyond classes, there’s also the Call of Duty-like leveling and upgrade system. As you rack up experience, you’ll unlock new special abilities, such as draining health from enemies to use on yourself or team defense buffs. You’ll start playing as the default Transformers from the story, but as you level up you’ll gain the ability to create customized characters, which becomes a sort of equivalent to Call of Duty’s loadout system. 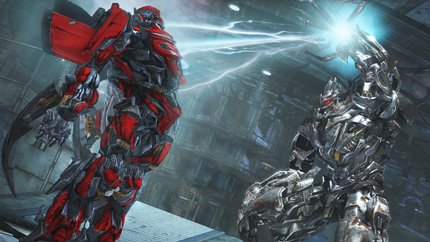 Battles unfold with that same heavy–if slightly plodding–sense of movement that makes you feel like your Transformers are a real force to be reckoned with, and the shooting has a similarly gratifying sense of impact. It all feels very similar to War for Cybertron, a game that received mixed but mostly positive reviews from critics. If you’re looking for a multiplayer shooter in that same vein, Dark of the Moon looks like it’ll fill that robo-smashing void life.