SEATTLE – Apple Inc. is giving its chief operating officer a $5 million bonus for “outstanding performance” running the company while CEO Steve Jobs was on medical leave. 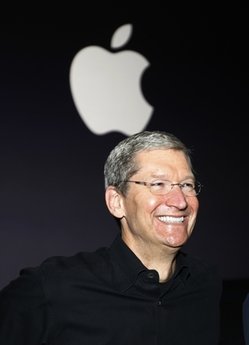 Jobs, 55, famously limits his salary to $1 per year, which leaves Cook the company’s highest-paid executive. In 2009, Cook received an $800,400 salary; $800,000 in nonstock incentive compensation; and about $40,900 in company matches to his retirement account, life insurance premiums and cash for unused vacation days.

The COO also holds 13,741 shares of Apple stock and 500,000 additional restricted stock options that have not yet vested, according to a January filing with the Securities and Exchange Commission.

Cook took the company reins when Jobs, a pancreatic cancer survivor, went on medical leave from January through June 2009.

It was Cook’s second stint leading Apple. Cook, who joined Apple in 1998, ran the Cupertino, Calif.-based company for two months in 2004 while Jobs recovered from surgery for pancreatic cancer. His performance then won him the promotion to chief operating officer in 2005.

Analysts credit Cook with solving problems that Apple was having with inventory management. That has been key to Apple’s ability to amass $25 billion in cash and short-term investments. Many people consider Cook as Jobs’ logical successor.

In the months leading up to Jobs’ medical leave, rumors about his health could send Apple’s stock soaring and sinking as investors worried that Apple would be lost without his vision.

But under Cook’s direction in 2009, the company kept cranking out well-received products including updated laptops with lower entry-level prices and a faster iPhone with many longed-for features. Apple sold more than a million of the new iPhone 3GS during its first three days on the market.

Investors seemed confident in Cook’s abilities. Apple’s shares rose 67 percent to close at $142.44 the Friday before Jobs returned to work last June. Since then, the stock has added another 59 percent to close Friday at $226.60