Redmond, Washington-based Microsoft Corp. officially made it known through The Windows Blog that the final version of Internet Explorer 9 [IE9] will become available to the public on March 14 of this year, beginning at 9:00 PM Pacific Time — 12:00 AM Eastern Time. 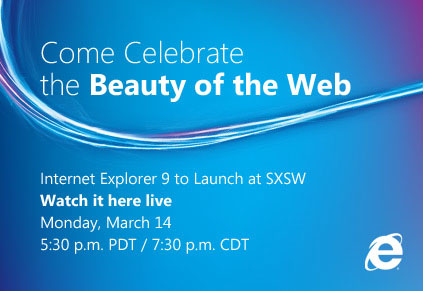 Microsoft will hold an event during South by Southwest [SXSW] in Austin, Texas on the aforementioned date to “celebrate the developers and designers who are making a more beautiful web.”

It’s important to take into account that the final build of Internet Explorer 9 is being released exactly one year after Microsoft made available the first developer preview of it back in 2010.

To watch the event live on March 14, click here.

Windows 7 tablet – ExoPC now up for pre-order at Microsoft Store, shipping next week