One of the first things promoted when Apple announced OS 4.0 was the ability to finally run VoIP apps, such as Skype, as background processes on iPhone. Users sent up a collective “hooray” and, in my opinion, Skype was poised to become a can’t-live-without download. (It wasn’t one for me; I had to reinstall the app to check out this new update, as I had removed it long ago. 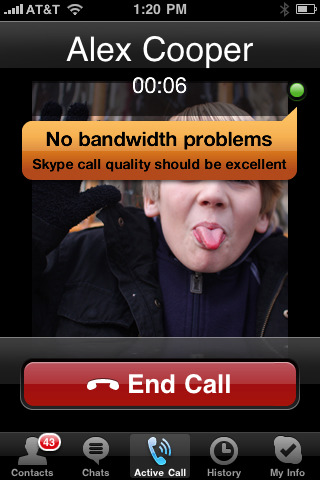 Skype 2.0’s biggest draw is its new support for Skype-to-Skype calls over the 3G network. However, users who may have been excited about this new feature got a nasty surprise: Skype will soon charge for this service. While connections over Wi-Fi appear to be remaining free, use of the 3G network will result in a yet-to-be-determined charge. It’s unclear when the charges will go into effect—some information says through August, others say through the end of 2010; either way, we know the change is coming.

Color me confused. I have to wonder if Skype has forgotten that the iPhone is, in fact, a telephone and that users already pay large amounts of money for monthly minutes. Skype is still a worthy app for free calling over Wi-Fi, but I can’t see anyone paying to use the service on 3G, except, perhaps, in international cases—and even that is an assumption.

The 2.0 update also neglects push notifications. This may be a moot point once OS 4.0 is available, but until then, push is something users have been clamoring for that wasn’t delivered. Beyond the new 3G capabilities, there are minor modifications in launch speed, call quality indication and sound quality for those on newer devices; however, little else has changed in Skype’s update.