Apple unveiled the new iPod touch today at their special event, along with several other music- and media-related devices. Of course, we’ve been hearing murmurs and leaks about it for some time now, and the new device pretty much tallies with our expectations. 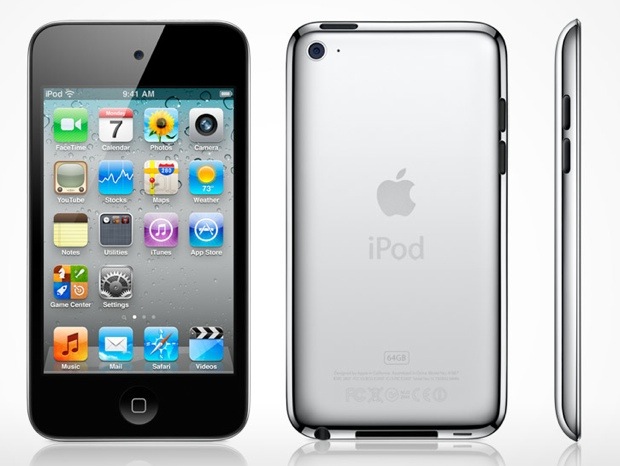 The two big improvements are the Retina screen and the dual cameras. The screen is the same found in the iPhone 4: 960×640, 3.5″, all as expected. The rear camera does 720p, but only takes pictures at 960×720 (?!); the front-facing VGA camera is the same. Steve went so far as calling the iPod touch the “iPhone without a contract.”

It’s running an A4 processor, and is available with up to 64GB of space. It seems to have all the same internals, including gyro, but we’ll check the specs once the store goes up. Historically the iPod touch has had a different PCB layout, that sort of thing; we’ll find out when we see the first teardown. FaceTime will work between the iPod touch and iPhone, by the way.

Here are the price points:

The styling is a bit of a cross between the old iPod touch and the new iPhone 4. It’s very thin and chromey, but without the flat sides. It’s a tenth of an inch thinner, and has an ever-so-slightly smaller footprint.

Steve mentioned that they’re outselling both Nintendo and Sony in gaming. Believable, but I’d like to see the actual numbers. Most of the games sold on the iPhone and such are less than $5.

The new 4.1 update should ship with these, including the new Game Center and other goodies. The new iPod touches will be shipping next week, but you can pre-order them now.

Update: the specs on Apple’s page note that the new iPod touch only takes still pictures at 960×720. That’s nonsense. If the sensor can capture 1280×720 video at 30FPS, surely it’s capable of better stills. If the sensor is only capable of 960×720 images and they’re just stretching it to 1280×720, I’m going to have an image quality hissy fit.