Sony brings to video professionals a new NXCAM camcorder, the compact-sized HXR-NX30U with built-in projector. According to Sony, the NX30U is its smallest, lightest handheld professional camcorder. It is equipped with 1/2.88-inch Exmor R CMOS image sensor and a Carl Zeiss Vario Sonnar T* lens with 26mm wide angle and 10x optical zoom. 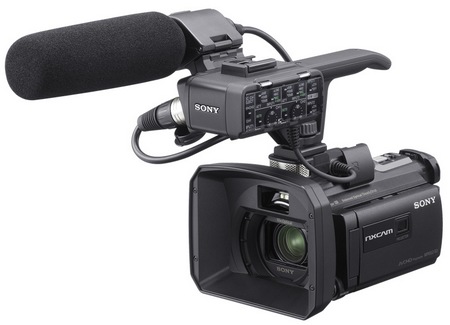 The HXR-NX30U is capable of Full HD 1080p video recording at 60p/30p/24p or 60i as well as 720/60p, and Balanced Optical Steady Shot image stabilization technology is included to reduce camera shake. The camcorder uses AVCHD format and comes with 96GB internal memory, and a SD/MS card slot for storage. Other than the LCD display,  it also comes with built-in projector that lets users to review footage with a big screen size, capable of showing images at up to 100-inch screen size from distance of about 16 feet (5m) on any flat surface. While the Exmor R sensor has nice low-light sensitivity, Sony also adds a video light above the lens for better Night Shot performance.

The Sony HXR-NX30U features a detachable XLR unit for professional audio recording. It will be released in June for less than $2500.