Not since the days of the Nintendo Entertainment System has Nintendo been so committed to the Super Mario franchise on its current generation console: 2007 was the year that Nintendo revamped the 3D Mario design with Super Mario Galaxy, and just six months ago the company rebooted the 2D design with New Super Mario Bros. Wii. Just a short wait later, Nintendo’s returned to its first Wii Mario game to give it a second go: there is so much creativity, variety and challenge poured into this sequel. 2007 Super Mario Galaxy was brilliant, but 2010’s Super Mario Galaxy 2 is absolutely amazing. 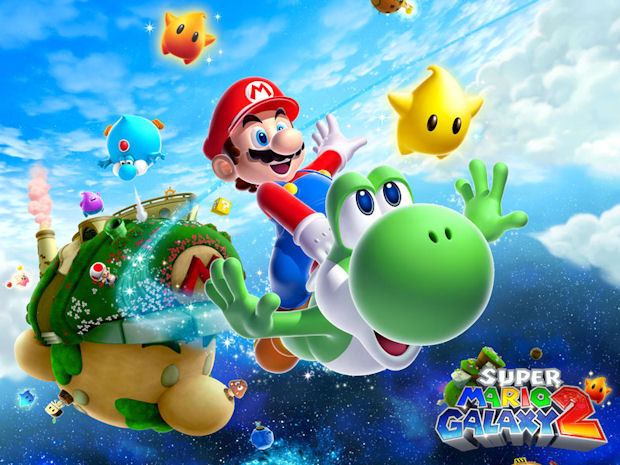 By now it’s a given that any game in the “Super Mario” franchise is a project Nintendo takes seriously. Even last year’s New Super Mario Bros. Wii, a game that I felt played it a little too safe, was still an incredibly fun throwback to what made (and still makes) the classic 8 and 16-bit installments such timeless videogames. Super Mario Galaxy 2 has a stigma similar to last year’s Mario game: the Galaxy design already wowed us three years ago, so Nintendo would really have to work hard to make jaded gamers stand up and take notice.

There’s no denying that Super Mario Galaxy is the foundation for Super Mario Galaxy 2. The sequel uses the same engine, same controls, and same basic concept. So if anything, the reason why Super Mario Galaxy 2 is so damn fantastic is mostly due to the fact that the team learned from the first game: what worked, what needed fixing, and how to improve on such an already masterful Wii creation. The result of that effort is one of the most refined and most fulfilling videogame experiences of this generation.

The original Super Mario Galaxy already oozed creativity as it evolved the once-innovative 3D platforming into something spectacular. In the game, players had the ability to roam areas that ranged from standard Mario-style levels to miniature planetoids with their own orbital gravity, while still utilizing the same familiar and refined gameplay mechanics. The sequel steps it up with more of what we got with the first game, while taking the gameplay in new directions with sharp and very welcome additions.