Verizon Wireless made the long-awaited announcement Tuesday that it will start selling a version of the iPhone 4 on Feb. 10, giving U.S. iPhone buyers a choice of carriers for the first time.

Since its 2007 debut, Apple Inc.’s phone has been sold exclusively for AT&T’s network in the U.S.

Verizon Communications Inc.’s chief operating officer, Lowell McAdam, made the announcement in New York, joined by Apple COO Tim Cook, who called it “the beginning of a great relationship between Verizon and Apple.” 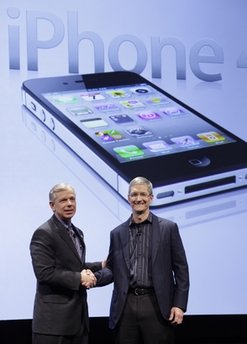 Pre-orders will start Feb. 3. The price will be $200 or $300 with a two-year contract, depending on the model, about the same as the iPhone through AT&T. It will be sold through Verizon, Apple and other stores nationwide, as well as over the Internet.

AT&T activated 11.1 million iPhones in the first nine months of 2010. Analysts now expect Verizon to snag some users from AT&T, but the impact will likely be muted because most iPhone users have two-year contracts, and many are on family and employer plans. Verizon did not reveal its service pricing plans on Tuesday.

Verizon’s iPhone version will work only on the carrier’s current “3G” network even though the carrier has fired up a faster “4G” network in many cities. That super-fast wireless data network is available only to plug-in laptop modems for now, but Verizon will have smart phones for it this summer.

Cook said the first generation of “4G” phone chips would have forced some design compromises, which Apple wasn’t willing to make.

“Secondly and most importantly, Verizon customers have told us they want the iPhone now,” Cook said. “I can’t tell you the number of times I’ve been asked and my colleagues have been asked . When will the iPhone work on the Verizon network?”

Cook wouldn’t say if Verizon will get the iPhone 5 when it debuts this summer, if Apple follows its regular once-a-year upgrade schedule.

Verizon’s iPhone 4 has one feature AT&T’s does not: It can act as a portable Wi-Fi “hot spot,” connecting up to five laptops or other devices to Verizon’s 3G network through Wi-Fi. It’s a feature that’s been offered on other smart phones, usually for an added monthly fee.

The Verizon iPhone is the first one that works on so-called “CDMA” networks, a standard also employed by Sprint Nextel Corp. and carriers in China and South Korea. Cook said the phone wouldn’t be exclusive to Verizon, but he didn’t say what other carriers might get it. Analysts don’t expect Sprint to sell it.