WASHINGTON (AFP) – As an electronic reader, Apple’s iPad has been touted as a possible “Kindle killer” but what has videogame makers buzzing is the potential of the touchscreen tablet computer as a gaming platform. 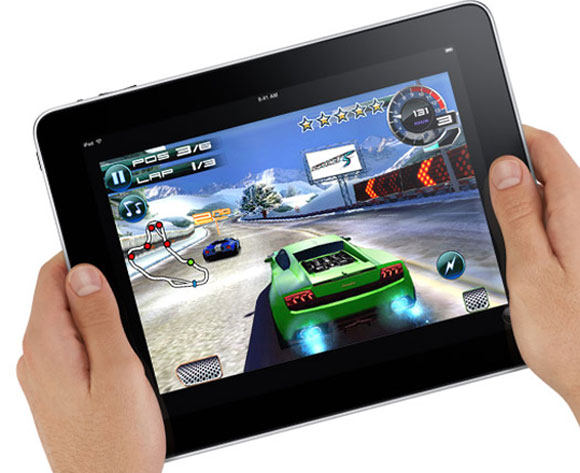 Soendergaard’s Denmark-based company is building a pet simulation game for the iPhone called “Pocket Creatures” and he said the iPad will allow the game developers to add “features that we only thought we could a year ago.”

The iPad’s larger screen, rich graphics and processing power has videogame and application developers around the world racing to put the final touches on programs for the iPad in time for when it hits the stores next month.

Free and paid applications for the iPhone — more than 150,000 to date — helped make the smartphone a smash hit and developers are hoping for similar success with the iPad, which goes on sale in the United States on April 3 and in nine other countries at the end of the month.

“We’re very excited about the iPad because it gives us more room to play,” said Brian Meehan, the head of worldwide product development at Sourcebits, a company focused on mobile applications and gaming with offices in Atlanta and Bangalore, India.

“It’s got a larger screen obviously and more CPU,” Meehan said of the iPad’s central processing unit, what Tactile’s Soendergaard described as the “power under the hood.”

Besides games, one of Sourcebits most successful products is “Knocking Live Video,” which allows iPhone owners to share live video with each other and has attracted over 750,000 users in just three months.

“We’ll ultimately build that out for the iPad,” Meehan said.

“For gaming, the iPad’s going to be kind of in a bit of a world of its own,” he added.

“If you look at Sony’s PSP and all the other portable gaming devices they may be a little bit bigger than the iPod Touch or the iPhone but they’re all in that same size area.

“Now you have this device that’s also going to be able to connect to (the Internet),” he said. “That in itself is a big playing field for everybody in the gaming world.”

Soendergaard said the iPad is “different from the iPhone where you have your personal apps” and predicted it will be “a family device, a shared device.

“On the multi-player side it’s going to be really exciting,” he said. “Maybe you can play board games on it.”

Mike Rasmussen of Durham, North Carolina-based Republic of Fun, publisher of “Slug Wars” and other iPhone titles, agreed, saying the iPad opens up all kinds of new possibilities for game makers.

“It’s about the right size to place down on a table between four people,” said Rasmussen, whose title at Republic of Fun is “el presidente” in keeping with the name of his company.

“We’ve really started thinking about it as kind of the ultimate board game device which can create really interactive, fun, multi-player experiences for groups of people that just are not possible on a device like the iPhone.”

Game makers are not the only ones bullish about the iPad. So are financial analysts and application developers.

“We were able to demo the (iPad) at the launch event and were impressed by the gaming and e-book experience in particular,” said Ben Reitzes, an analyst at Barclays Capital.

“We found the gaming experience to be far superior to the smaller screen platforms and wouldn’t be surprised if gaming popularity turned out to be one of the gadget’s big surprises,” Reitzes said in a research note on Friday.

PointAbout, a Washington-based technology company which has built iPhone applications for the White House, the US Coast Guard and The Washington Post among others, is looking to adapt its popular AppMakr service to the iPad.

AppMakr can make iPhone applications for as little as 199 dollars and has been used to build 3,800 iPhone programs in just the six weeks since it was launched, said PointAbout co-founder and chief operating officer Daniel Odio.

“We will probably end up adding iPad into AppMakr so that people can build low-cost iPad apps,” Odio said. “I imagine it’s going to take us three to six months to do that but it is our goal.”

Apple to release iOS 4.3.2 in the next two weeks

iTunes 9.2 for Windows and Mac, Now available for download.