It may have “Windows” in the branding, but Windows Phone 7 is not the desktop PC experience shoehorned into a cellphone. Microsoft tried that with Windows Mobile… and we all know how that turned out. Today, eight months after the Windows Phone 7 OS unveiling in Barcelona, we’re finally seeing the official launch of the retail hardware: nine new WP7 handsets, some available October 21 in select European and Asian markets and others from early November in 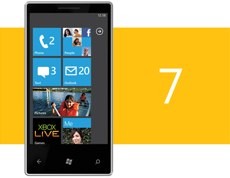 the US. The phones will find their way to over 60 cellphone operators in more than 30 countries this year. Microsoft tapped Dell, HTC, LG, and Samsung to deliver the Snapdragon-based handsets with a carrier list that includes AT&T, T-Mobile USA, Vodafone, TELUS, América Móvil, Deutsche Telekom AG, Movistar, O2, Orange, SFR, SingTel, and Telstra. And that’s just for the first wave — Microsoft has even more handsets coming in 2011 including the first for Sprint and Verizon in the US. Here’s the lineup of 480 x 800 pixel (WVGA) phones announced today:

“Glance and Go,” is the slogan Microsoft is using to differentiate itself from an already crowded smartphone market. Something we’ve already seen alluded to in that leaked AT&T ad. As Ballmer notes, “Microsoft and its partners are delivering a different kind of mobile phone and experience – one that makes everyday tasks faster by getting more done in fewer steps and providing timely information in a ‘glance and go’ format.” He’s referring to WP7’s customizable Live Tiles, of course. Xbox Live integration is another biggie with EA Games just announcing its first Xbox Live-enabled wares coming to Windows Phone 7 in the fall including “Need for Speed Undercover,” “Tetris,” “Monopoly,” and “The Sims 3.” The other big differentiators are the slick Metro UI, integrated support for Zune media and Zune Pass subscriptions, Bing search and maps, Windows Live including the free Find My Phone service, and Microsoft Office Mobile.