Motorola is placing two new bets on the open-source Android operating system with the release of its Backflip and Devour smartphones. The uniquely designed Backflip began selling through AT&T Wireless late last week, and the Detour is now available from Verizon Wireless.

The 3G/Wi-Fi Backflip, at $99 after rebate and with a two-year contract, is gaining a lot of attention for its unique flip-out QWERTY keyboard, which AT&T has described as “an original reverse flip design.” 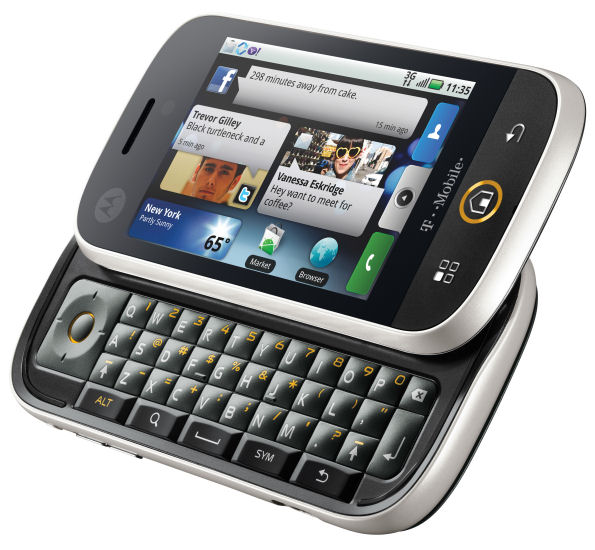 By flipping the keyboard backward, the device can be set up in tabletop mode for listening to music, looking at videos and photos, or acting as a digital alarm clock. There’s also a five-megapixel autofocus camera with LED flash, a full HTML browser, and AT&T’s Backtrack. The carrier describes Backtrack as “a new way to scroll through the web, texts, e-mails, and news feeds,” which the user can do without clogging up the home screen.

MOTOBLUR, available on both the Backflip and the Devour, has also become a differentiating factor for Motorola. It’s a social-networking service that streams the user’s messages, posts, tweets, pictures and contacts so multiple applications don’t need to be opened.

Socially active users can also send broadcast messages to multiple friends at once through multiple apps. The social information is delivered automatically to customizable, live widgets on the home screen, where Facebook, MySpace and Twitter are synced together.

Avi Greengart, an analyst with industry research firm Current Analysis, said Backflip’s form factor and hyper-social MOTOBLUR will attract more attention from the average consumer than its use of Android.

The keyboard, he said, “opens the wrong way,” and it “takes a little time to get used to.” But, he added, the benefits of this design include a trackpad on the back of the keyboard, so a user can navigate without touching the screen, and the unique ability to open it halfway so that the smartphone stands up as an alarm clock.

Greengart said he showed the phone to a focus group of teenagers, and they liked its unique keyboard design. He also noted that MOTOBLUR is “somewhat polarizing,” since it is a feature primarily for users who want to be “constantly bombarded by updates and connectivity” with their friends.

He praised the Devour’s extruded aluminum case as a “beautiful work of art.” The new Motorola model, with a horizontal sliding QWERTY keyboard and a trackpad next to the screen, also features MOTOBLUR. Greengart said the Devour is a good choice for Verizon customers who don’t want to move up to the carrier’s much-publicized first Android phone, Motorola’s Droid.

Motorola BACKFLIP coming to Europe, Germany gets it in April