Opera has officially asked Apple to approve its Mini browser for the iPhone. But what are the chances of Club Cupertino giving a thumbs up to a competing application?

The browser – which was first unveiled at the 2010 Mobile World Congress – has already received positive reviews for its ability to “power through” Web pages six times faster than Apple’s Safari. 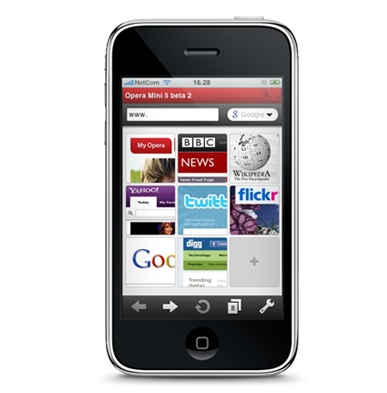 “Due to server-side rendering, Mini compresses data by up to 90 percent before sending it to the phone, resulting in rapid page loading and more Web per MB for the end user,” Opera explained in an official statement.

“Those familiar with iPhone roaming charges will relish Opera Mini’s ability to deliver more for less, giving users the Web they want quickly, without, the high costs.”

However, a number of journalists and bloggers, including CNET’s Jessica Dolcourt, have expressed skepticism over the possibility of Apple happily approving a rival browser.

“The real elephant in the room – the question perhaps being asked by those who follow Apple’s submissions and rejections – is why Opera would go to lengths to submit a browser that has a high chance of being cut short,” wrote Dolcourt.

“Apple isn’t known for approving browsers that aren’t based on Webkit, and Opera Mini absolutely falls into the latter category. Like many other iPhone apps, it’s written in the Objective C programming language on the back end…and on the front end is written in [Opera’s] own little language.”