Eager to be the first on your block with an iPad? Apple started taking orders for the tablets on Friday. Wi-Fi models running from $499 to $699 will be available on April 3; 3G models, costing $629 to $829, won’t be available until late April. 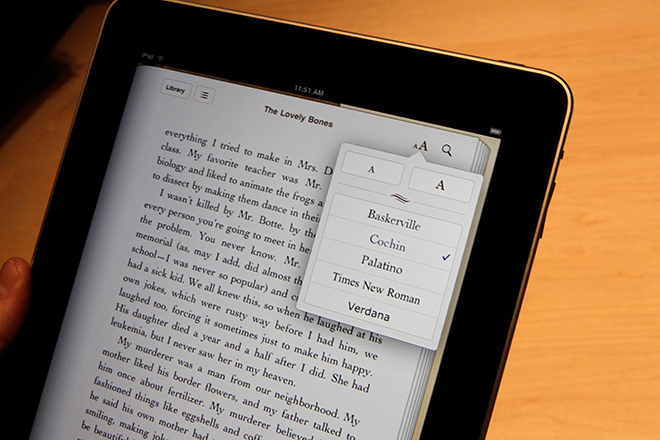 Along with the advance orders, Apple released some details on what’s expected to be a key app for the new device — e-books. Promoting the iBooks feature of the iPad, Apple’s web site explains, “iBooks works with VoiceOver, the screen reader in iPad, so it can read you the contents of any page. Even with all these extras, reading is so natural on iPad, the technology seems to disappear.”

The site also promotes iBooks as a totally new reading experience. “Turn iPad to portrait to view a single page. Or view two pages at once by rotating to landscape. Change the text size. Even change the font. Touch and hold any word to look it up in the built-in dictionary or Wikipedia, or to search for it throughout the book and on the web,” the site says.

And in a positive sign for open-source books, Apple announced the iPad will support the EPUB format for digital books — even those that are not offered through Apple’s e-commerce sites.

“The iBooks app uses the EPUB format — the most popular open book format in the world,” Apple’s site says. “That makes it easy for publishers to create iBook versions of your favorite reads. And you can add free EPUB titles to iTunes and sync them to the iBooks app on your iPad.”

That support could go a long way to making the iPad a broadly accepted device for reading books, much as the iPod supported generic MP3 audio files, as well as music bought from Apple’s iTunes Store.

But a read-aloud function for books is likely to cause trouble. The Authors Guild is adamant that publishers do not have the right to license audio rights to companies like Amazon and Apple without separate agreements.

“They don’t have the right to read a book out loud,” said Paul Aiken, executive director of the Authors Guild, in an interview with The Wall Street Journal. “That’s an audio right, which is derivative under copyright law.”

When Amazon’s Kindle 2 came with a read-aloud feature, the guild insisted that authors are entitled to licensing fees when books are read aloud. Amazon responded that “no copy is made, no derivative work is created, and no performance is being given.” But Amazon was forced to back down, giving rights owners the choice to enable or disable the audio function title by title.

The National Federation of the Blind has praised Apple for its VoiceOver feature. In January the agency issued a release in which President Dr. Marc Maurer said: “Blind consumers, like our sighted friends and colleagues, will be able to share in the experience of using this new device from the moment we take it out of the box. By integrating accessibility into its products, Apple is setting an example that we believe the rest of the electronics industry should follow.”