Ever wished you could try out an app for your iPhone, iPod Touch or iPad before buying it? Well, now you can – sort of. OK, not really.

That’s right: Apple has just inaugurated a new section of its App Store designed to tempt hesitant iOS users into buying yet another potentially useless application. 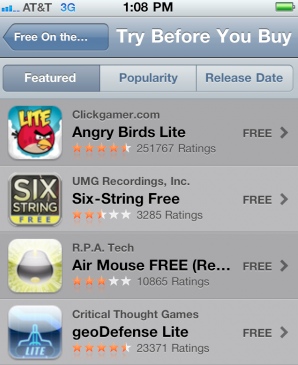 But as with everything Apple, there is a catch.

Yes, the “try before you buy” option is currently only available for a limited number of apps, specifically “lite” programs whose full versions are sold in the regular Apple store.

So, if the app doesn’t already have a free iteration, it won’t appear in Apple’s sadly limited “Try Before You Buy” section.

Then what’s the freakin’ point, you ask?

Well, Jolie O’Dell of Mashable speculates that Club Cupertino’s latest initiative may have been launched in an effort to deter would-be pirates, who have reportedly cost the App Store approximately half a billion dollars.

“Many of the cracked or illegally shared apps were reportedly downloaded because the user didn’t have the option of making a truly informed purchase decision. They couldn’t use the apps, even for a brief test drive,” wrote O’Dell.

“In addition to taking a bite out of piracy, we’re thinking the section was added to allow Apple’s smartphones to remain competitive with Android OS devices. The Android Market has a liberal returns policy; apps can be purchased and returned for a full and automatic refund for up to a day following purchase.”

However, Devindra Hardawar of MobileBeat opined that implementing a 24-hour trial period would ultimately act as a more effective strategy for Apple.

“If [Steve Jobs] really wanted to fight back against piracy – or really, accomplish anything – with the ‘try before you buy’ model, it should step up and adopt the 24-hour trial limit that Google is using on the Android Marketplace.