Google’s Chrome development team has pushed a pre-release version of Chrome 8 into the dev channel for those that would like an early look at the next version of the Chrome web browser. While far from complete, Chrome 8 adds some welcome new features, including more hardware acceleration and the arrival Google’s new “Instant search” right inside the URL bar of Chrome. 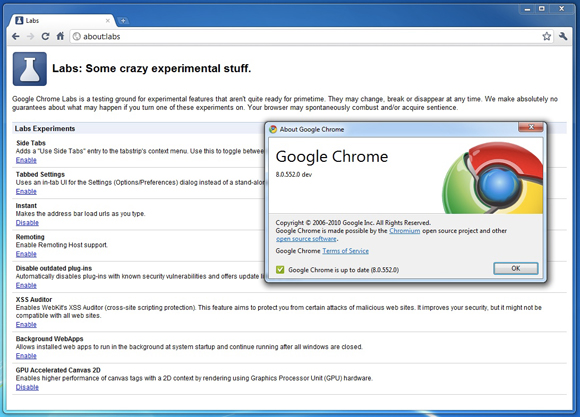 Chrome has several “channels” — the Canary and Developer channels are where you get the earliest pre-release versions of Chrome, the beta channel releases are a little more stable, and the regular channel (which the majority of Chrome users run) is where fully-baked code ships. There’s also a build called Chromium, the open source, non-Google version of Chrome which has almost all of the same features of Google’s browser.

Once Chrome 8 is installed, head to the Labs page (just type about:labs in the URL bar) to see all of the experimental options. Turn on the Instant feature to get the search-as-you-type functionality in the Chrome URL bar.

You’ll also notice a couple other new options on the Labs page, including an early form of GPU acceleration for HTML5 Canvas elements. The hardware acceleration feature was also in the Chrome 7 dev build, but turning it on required starting Chrome from the command line. The Chrome 8 update makes it much easier to turn on hardware acceleration. For now the acceleration is limited to 2D animations that use the HTML5 canvas tag, but, provided you have a capable graphics card, Chrome should be able to offload that rendering to your GPU, speeding up page load times.

Also new in Chrome 8 is partial support for Google’s Cloud Printing effort. Designed to let you to print to your home PC from anywhere, Google’s Cloud Printing project is little more than an idea at this point. But we can see the beginnings of Chrome integration in this release with a new sign-in option in Chrome’s settings page (at the bottom of the Under the Hood tab). Unfortunately, signing in is about all you can do at this stage.

This early build of Chrome 8 also contains a number of bug fixes and smaller changes, which you can browse through on the Chromium project’s SVN page.

Keep in mind that Chrome 8 is very much an experimental build and there may be some bugs lurking in this early build, but if you’d like to give it a try, you can head over the Chrome channel page and grab a copy today.