Who uses 3.5-inch floppy disks anymore? No one. So it is a mainly symbolic announcement that Sony will no longer be producing the disks in Japan, officially putting the last death knell on the format.

Sony stopped making floppy disks in the US and other major markets long ago, and every other big corporation has pulled out of the now-archaic format. 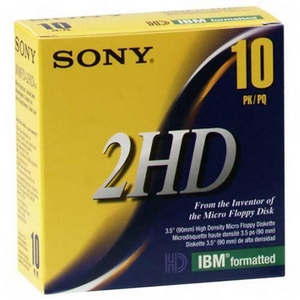 According to Cnet, Sony still managed to sell 12 million floppy disks in its last fiscal year. That may be because it’s the only real major player still in the market. But it has decided that it’s time to move forward.

Sony is credited with bringing the 3.5-inch format to the market. It first introduced the medium to computers way back in 1981. Since then it has become completely obsolete with the advent of small memory cards, USB drives, and to a lesser extent the non-rewritable CD and DVD standard.

At the time, a handheld storage device that could store 1.44 MB was a big deal. Now, it has about the value of a half cent piece.