Apple Inc.’s iPhone and iPad devices will soon be able to run more than one program at a time, an ability that phones from Apple’s rivals already offer and that iPhone owners have long sought.

The changes, coming this summer to iPhones and this fall to iPads, mean that users might be able to listen to music through the Pandora program and check a bank account online simultaneously. Currently, users must return to Apple’s home screen, effectively quitting the open program, before starting a new task. 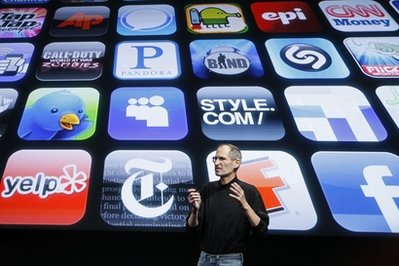 “We weren’t the first to this party, but we’re going to be the best,” Apple CEO Steve Jobs declared Thursday, as bloggers, software developers and others in the audience greeted the news of such “multitasking” with applause.

The iPhone already permits some multitasking, but that’s largely limited to Apple’s own programs. Apple had not given users ways to seamlessly switch among all the software “apps” available from outside software companies, the way phones from rivals Palm Inc. and Google Inc. already do.

That will change with the updates known as iPhone OS 4. Apple generally makes such updates available for free, and often automatically, as a software download.

“It really changes the way you use the iPhone,” Jobs said. “You’re bouncing around the apps with tremendous fluidity.”

Jobs said the company waited so long because it wanted to offer multitasking in a way that didn’t drain the iPhone’s battery or reduce the phone’s performance.

In demonstrating the feature, Jobs double-tapped on the iPhone’s main button while playing a game to reveal a row of icons for other programs that were quietly running in the background and accessible with a finger tap.

Multitasking could enhance the functionality of Internet phone services such as Skype. Currently, a call automatically ends if you exit the Skype app. With multitasking, that call could continue while you look up directions, or you could receive incoming Skype calls even if you’re reading the news or a “Gossip Girl” blog instead.

Full multitasking had been high on many people’s wish lists. Because Apple’s new iPad runs the same software as the iPhone, changes would apply to that larger gadget as well. Some people have held off buying one because of its inability to run more than one program at once.

Other updates include the ability to have messages from multiple e-mail accounts land in a single inbox and a way to connect an iPhone with a regular keyboard using Bluetooth wireless technology.

But Apple still won’t support Flash technology, even though many Web sites require it for displaying video. Flash was alongside multitasking at the top of many wish lists.

Although Apple is making the updates available to all iPhone, iPod Touch and iPad models, some features will only work with newer versions. The multitasking function, for example, won’t work with the original iPhone or the iPhone 3G — only the 3GS versions that came out last summer. For the iPod Touch, you’d need the models that came out late last year.

Jobs also announced an advertising platform called iAd in which Apple will sell and host ads to run on apps made by outside developers; those developers will get 60 percent of the ad revenue. Jobs said users shouldn’t find the ads annoying because Apple will make it easy for people to navigate back to what they were doing before clicking.

Jobs also said the company has sold 450,000 iPads since its launch Saturday. The company earlier said it delivered more than 300,000 iPads on the first day, though that included pre-orders and units shipped to retail stores such as Best Buy but not necessarily purchased right away.

The iPad models currently on sale connect to the Internet using Wi-Fi, at prices that start at $499.