Arriving with an entirely appropriate bombastic marketing campaign last week, Black Ops, the latest instalment of the Call of Duty series, has more of an air of the blockbuster film sequel or much-awaited follow-up album about it. The hype and colossal development spend were certainly similar, but is it worthy of all this shock and awe? 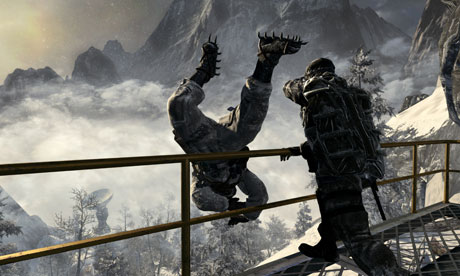 Shifting the action to the 1960s and the cold war sends special ops veteran Alex Mason into furious combat with communist hordes in Russia, Cuba and Vietnam – the game opening in an aggressive interrogation, leading to playable flashbacks from the titular covert missions. Featuring historical events such as the Bay of Pigs incident and Kennedy’s assassination, Black Ops delivers a rollercoaster single-player campaign roughly a third longer than Call of Duty: Modern Warfare 2; a lesson learned after gamers voiced their displeasure last time around.

Black Ops looks and feels much the same as MW2, with sharp movements and responsive controls enabling you to duck and dive around fully destructible environments. Annoyingly, you still can’t lean around obstacles. CoD relies on relentless pace, pin-sharp graphics and blisteringly fast frame-rates to offer the spectacular but linear thrill-ride of the arcade game, which is its forte. Yet Black Ops brings no real innovation to the genre.

It looks fantastic, though, whether you’re stalking Vietcong in dense jungle or exploiting exceptional distance rendering when sniping Russians on snowy mountains. The use of faded colour, to reference classic Vietnam movies, for example, is executed perfectly, although high-detail moments occasionally cause screen distortion. The weapons have also received an upgrade, with reload speed, ballistic power and accuracy carefully balanced to ensure that they don’t offer an unfair advantage in multiplayer, incendiary “dragon’s breath” shotgun rounds and exploding crossbow bolts in particular adding a level of depth previously unseen.

Unsurprisingly, real longevity is online with new kill streak bonuses, including napalm strikes, controllable helicopters and an exploding remote-controlled car. Veterans can even wager CoD points against players around the world, and teaming up in co-op and free-for-all challenges has lost none of its appeal.