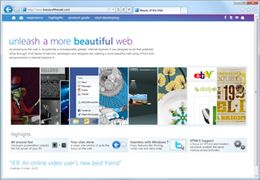 The last preview release of IE9, which only arrived a few weeks ago, saw increased support for web standards. But Microsoft made it clear to us during a phone briefing that Wednesday’s release is all about speed and performance.

To that point, PP7 contains an updated version of the Chakra JavaScript engine. This new engine for IE9 was first introduced at Microsoft’s PDC developer event in November 2009. During the last year, the company has been improving Chakra to the point where it’s now scoring over 300 percent higher on the WebKit SunSpider benchmark than it was at launch.

While some browsers are certainly faster than others, the major browser vendors continue to tweak their internal workings and make small improvements to speed. JavaScript performance is particularly important, since modern web applications like Gmail, Facebook and Twitter rely heavily on scripted actions. A faster browser means a snappier web app. Just last week, Mozilla released a new beta of Firefox 4 that included revamped code for its JägerMonkey and TraceMonkey JavaScript engines.

You can download this early version of the next IE browser directly from Microsoft. It’s available for PCs running Windows 7 and Vista. Also, this platform preview can be installed alongside IE9 Beta or IE8 with no problems.

Once you grab it, head over to the company’s demo playground and put the new browser through the paces. Be sure to report your results in the comments.

The whole “beta” versus “preview” thing is totally confusing, we know. But it wouldn’t be a Microsoft release if the versioning convention didn’t make your head spin.

Microsoft debuted the first beta of Internet Explorer 9 in September. But Wednesday’s release is not a second beta, it’s the seventh platform preview. Beta releases are considered to be almost totally stable and are intended for a more general audience. Platform previews are on the bleeding edge, and may contain code that isn’t as thoroughly tested. So, this release is primarily aimed at developers.

IE9 Beta is doing spectacularly well, however — Microsoft says its beta release has been downloaded 13 million times since its release two months ago. It has also been receiving kudos for its expanded support of web standards like HTML5, CSS 3 and WOFF.

The next IE9 beta will arrive some time in the near future. After that, the browser will move to the release candidate stage.

Microsoft’s Gavin says the IE9 pre-releases “continue to be quality-driven” with no specific public roadmap.

“The rapid adoption and the feedback we’ve gotten from developers have put us on a very good path to a release candidate,” he says.

Though Microsoft wouldn’t comment on it, our best guess puts IE9’s final release sometime during the spring of 2011.