It’s free and comes with a slew of touch interface bells and whistles built right in. The app is intended to allow for seamless navigation between tweets, photos, web pages, videos and other media and updates. It’s also usable even for those who don’t have Twitter  accounts. 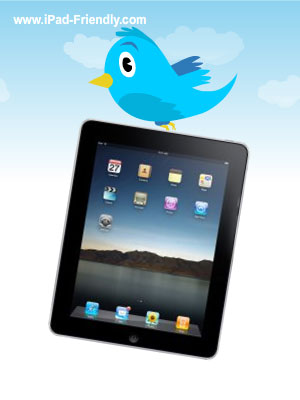 Twitter for iPad [iTunes link] has a few new UI touches that you haven’t seen elsewhere. These features are custom-designed for the larger screen and touch capabilities of the iPad. It also caters to what the iPad was made for: media consumption rather than creation. Twitter’s Leland Rechis, a mobile UX designer, writes on the Twitter blog that the iPad is “a device that really lets content shine.”

The main interface is a series of panes that can expand and retract based on the kind of content the user wants to access. “Tapping on a Tweet opens a pane to the right. Depending on the content in that Tweet, you’ll see a video or photo, or maybe a news story, or perhaps another Tweet. You can continue tapping on Tweets, opening new panes, and getting new content as long as you’d like,” writes Rechis.

Media viewing is optimized for the iPad, as well. Videos play in-line with other content and can be loaded while you’re browsing through your timeline. You can pinch a video to view it fullscreen, too.

Finally, Twitter has really done some interesting things with touchscreen capabilities in this app. When you pinch a tweet, you’ll see details about the author and have a list of actions you can take, including reply and retweet. A two-finger pull-down gesture will show the entire conversation around a tweet.

It’s a creative way to approach multitouch app building, and we look forward to playing with it ourselves. We’re also really looking forward to what apps may come to other tablets in the future.

The iTunes release is rolling out right now; if you can’t get the latest version of the app right now, wait a bit and try again. And of course, let us know what you think of Twitter for iPad in the comments.