Just days after the U.S. Copyright Office ruled that bypassing a manufacturer’s protection mechanisms to allow “handsets to execute software applications” no longer violates federal copyright law, the iPhone Dev Team on Sunday released a jailbreak for the iPhone 4 at JailbreakMe.com. 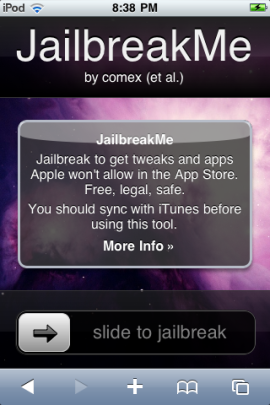 Unlike previous jailbreaks, which required the device to be connected to a computer to run the update, the latest jailbreak is accomplished completely via mobile Safari loaded on the device. The browser-based software bypass reportedly works on all iOS devices, including iPhones, iPads, and iPods running iOS 4 and iOS 4.01, but it will reportedly not work on devices running the iOS 4.1 beta.

Also, some users report the jailbreak disrupts FaceTime and MMS functionality on the device.

However, as of this writing, demand for the jailbreak is apparently so popular that the site’s servers can’t keep up, and many visitors report difficulty in getting through.

While the U.S. Copyright Office has declared the software legal, Apple discourages users from loading the bypass, reminding them that doing so will void their device’s warranty. “As we’ve said before, the vast majority of customers do not jailbreak their iPhones as this can violate the warranty and can cause the iPhone to become unstable and not work reliably,” Apple said in a statement earlier this week.