According to research group Distimo, as of the end of March, for the first time, the Android Market has more free apps than iTunes. That is because the majority of Android apps don’t cost any money, whereas the reverse is true for Apple’s store.

Distimo thinks this is only the beginning, and that the Android Market could eventually grow to have more apps – paid and free – than iTunes or any other app store.

“If all application stores maintain their current growth pace, approximately five months from now Google Android Market will be the largest store in terms of number of applications,” the firm wrote.

In the recent report, Distimo said the Android Market has grown by 16%, compared to just a 6% growth for the iPhone. However, the number of iPad-only apps grew by 12%, Blackberry’s App World reported a strong 21% increase, and Windows Phone 7 apps exploded by 38%. Those platforms, however, are still relatively nascent so any growth will seem disproportionately high. 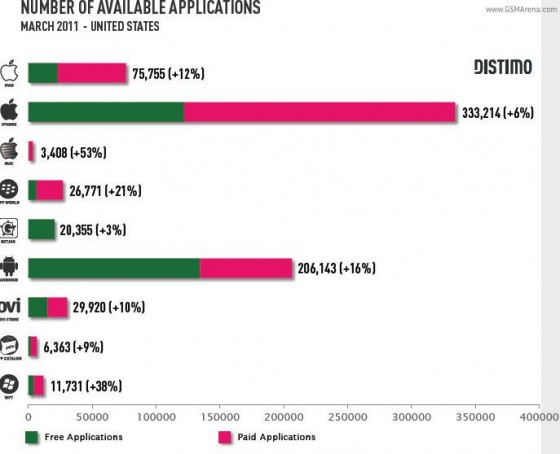 It seems iPhone interest is either slowly dwindling for developers, or it’s just reaching the saturation point. After all, the iPhone already has 333,000+ apps. How much more can there be?