Sprint on Friday announced the latest addition to its Android lineup, the Samsung Replensih. Billed as an eco-friendly smartphone, the Replenish is constructed of recycled and recyclable materials. It will also be the first Android-powered smartphone from Sprint that will not require the company’s $10 premium monthly data charge since the carrier made the new fee a requirement. Spec highlights include Android 2.2 (Froyo), a 2.8-inch QVGA touchscreen display, a QWERTY keyboard and a 2-megapixel camera. The Samsung Replenish will launch online and in stores on May 8th for $49.99 with a two-year contract. Hit the jump for the full release. 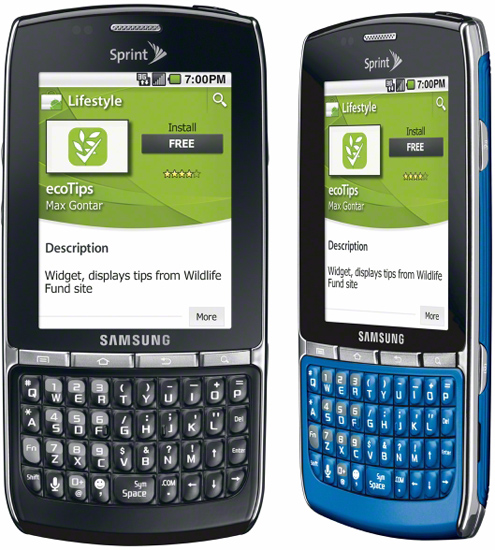 SAN FRANCISCO and DALLAS – April 15, 2011 – Sprint (NYSE:S) today unveiled several progressive initiatives building on Sprint’s environmental leadership in the wireless industry, including upcoming availability of the stylish Samsung Replenish™ from Samsung Telecommunications America (Samsung Mobile), the No. 1 mobile phone provider in the United States.1 Samsung Replenish, an Android touch QWERTY smartphone enabled with Sprint ID, will be available on May 8 at the affordable price of just $49.99 with a two-year service agreement and new-line activation or eligible upgrade.

Sprint is waiving the $10 monthly premium data add-on charge for Samsung Replenish to make it easier for customers to make eco-friendly buying decisions. In addition, the Earth-friendly2 Samsung Restore™, first available from Sprint in 2010, will be offered to Virgin Mobile USA customers without an annual contract beginning on April 18.

“We want to make it as simple as we can for our customers to go green with a robust selection of products and competitive pricing,” said Dan Hesse, Sprint CEO. “Samsung Replenish is as green as we could make it with more than 80 percent recyclable materials, housed in partially recycled plastics, energy efficient and built with fewer environmentally sensitive materials. As if this is not enough incentive, we are also lowering the monthly rate for this phone by $10 for new or existing customers so it pays for itself within just five months.”

Samsung Replenish, Sprint and Samsung Mobile’s first eco-friendly2 Android smartphone boasting access to more than 150,000 apps in Android Market™, is partially built with recycled plastics4 and recyclable packaging5 making it the ideal choice for the environmentally conscious consumer who needs the latest technology. The phone will also be enabled with Sprint ID, which lets customers personalize their device instantly with eco-friendly focused apps and mobile content.

“We are excited to expand our portfolio of eco-friendly devices to now include the Samsung Replenish with Sprint, Samsung’s first Android-powered eco-friendly phone, and the Samsung Restore with Virgin Mobile,” said Dale Sohn, president of Samsung Telecommunications America. “Both the Replenish and Restore offer an impressive feature set with hardware made from recycled materials and eco-centric2 packaging, giving customers the option to have an eco-friendly phone without having to compromise features and functionality.”

It has the following impressive eco-credentials:

Samsung Replenish requires activation on one of Sprint’s Everything Data plans. The Everything Data plan with Any Mobile, AnytimeSM includes unlimited text, Web and calling to and from any mobile in America while on the Sprint network, starting at just $69.99 per month – a savings of $39.99 per month vs. Verizon’s comparable plan with unlimited talk, text and Web (pricing excludes surcharges and taxes).

As the first green2 device from Virgin Mobile, Samsung Restore will cost just $79.99 (taxes and surcharges excluded) with no annual contract. Virgin Mobile offers Beyond Talk™ unlimited data plans starting at $25 per month.

Sprint’s new Green Sprint ID pack provides instant personalization in a single download with apps, widgets and mobile shortcuts on the user’s device, and it features apps from eco-conscious favorites such as TreeHugger.com, Earth911.com, Green America and the National Audubon Society. Starting today owners of select Sprint devices, including Samsung Transform™, Samsung Epic™ 4G* and Samsung Galaxy Tab™, can load the Green ID pack onto their device. Samsung Replenish will offer the Green ID pack when it launches on May 8. Like all other Sprint ID packs, the Green ID pack is free to download with Sprint’s Everything Data plan.

Sprint is committed to helping customers protect the environment. In addition to advancing its sustainable product goals, which include launching iconic “green” devices, Sprint is working to manage the environmental impacts of devices using a full life-cycle view, whether it be working with Underwriter’s Laboratory Environment to develop a global green phone standard or enhancing our industry-leading phone recycling efforts.

Earlier this month, Sprint and Samsung Mobile provided a $500,000 grant to the Green Education Foundation (GEF) to help launch their K12 “Sustainability Education Teaching Methods” professional development course. It was first made available during the National Association of Elementary School Principles (NAESP) 2011 annual convention and exposition in Tampa, Fla. With the grant, GEF was able to offer the course to each of the thousands of NAESP conference attendees to educate the next generation about environmental sustainability.

Sprint’s sustainability website, www.sprint.com/green, details Sprint’s green mobile applications and helps customers learn about the company’s sustainability initiatives, including online bill pay, wireless recycling programs and acquiring green tips, such as using mobile GPS to calculate the quickest route to save gas. To learn more about Sprint programs that protect the environment, go to www.sprint.com/responsibility or follow @SprintGreenNews on Twitter.

The Samsung Mobile Take Back Program™ allows consumers to send in their cell phones to be properly disposed of free of charge.

Samsung Mobile supports Samsung’s overall Eco-Management 2013 Plan announced in July 2009. The plan details a comprehensive set of sustainability goals to be achieved by Samsung in 2013, which include the reduction of greenhouse gas (GHG) emissions from manufacturing and product, the development of eco-friendly product, financial investment in eco-management initiatives, and enhanced green partnerships with suppliers and partners. To find out more information on the Samsung Recycling Direct and Samsung Mobile Take-Back Program please visit, www.samsung.com/recyclingdirect.