Sony has taken the wraps off new additions to its Sony Vaio E-series and Vaio C-series notebook computers, featuring second-generation “Sandy Bridge” Intel Core processors, a variety of screen sizes, and slim designs with colorful cases sure to appeal to consumers and anyone looking to stand out in a crowd. The new models also pack lots of entertainment options, along with Sony-specific technologies designed to make having fun—and getting online—simpler and easier. 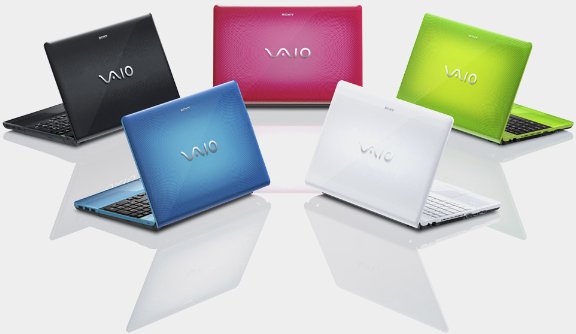 First up, the new Vaio E-series notebooks will be available in three screen sizes—14, 15.5, and 17.3 inches—and second-generation Intel Core i3 or Core i5 processors and sport Intel’s integrated graphics, although one 15.5-inch E-series model will feature an AMD E-350 Dual Core processors with AMD Mobility Radeon discrete graphics. Select models in the E-series will feature Intel Wireless Display technology (for pushing content to a big screen without fussing with cables), although all models will sport HDMI output along with a built-in mic and webcam for chatting. The E-series will also feature Sony’s Web button for one-touch Internet access without fully booting into Windows, and Sony also rolls in its own media gallery and troubleshooting software. All models will sport an edge-to-edge isolated keyboard, while the 15.5- and 17.3-inch models also sport numeric keypads.

The new Vaio C-series systems step up a bit, offering either 14- or 15.5-inch screen sizes and second-generation Intel Core i3 or Core i5 processors. The displays are powered by Intel’s integrated graphics, although selected models will be available with AMD Radeon HD 6630M hybrid graphics with 1 GB of dedicated video RAM. Sony says the 14-inch model gets up to nine hours of battery life for all-day on-the-go folks, while the 15.5-inch model can manage up to eight hours. The Vaio C-series will also offer Intel WiDi wireless display technology as an option: other options include Blu-ray drives, backlit keyboards with numeric keypads (select models). The new C-series systems will be available in blue or red with prices starting around $730; Sony is opening up pre-orders June 19, with the blue version landing at retailers in July and the red version coming to retail partners “this summer.”