Facebook and Skype have reportedly decided to team up together to integrate contact lists, voice and video chat, and other messaging services.

The integration could allow users to actually make phone calls to their friends on Facebook, using the voice-over IP service powered by Skype. It would also link the two services together, creating a universal friend/contact list between them.

According to a report from Allthingsd.com, which claims to have the exclusive scoop on this story, the partnership would also bring text messaging services and Facebook 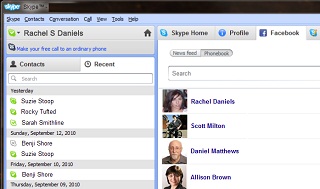 This totally fits in line with Facebook’s goal of having a presence across every single form of media and communication. It already spans across literally thousands, if not tens of thousands, of websites because of the integrated “Like” buttons and third-party site log-in services. And let’s face it: the mere fact that TV shows encourage viewers to go to their Facebook pages is nothing short of amazing for the social networking site.

Skype, which has 124 million active users, is by far the world’s leading VoIP provider. That’s clearly one thing Facebook does not have yet and it of course could not choose a better partner than Skype.

The deal could also bridge the two services in other ways – users could receive their Skype messages on Facebook, or Skype users can click on one of their contacts to see his or her latest Facebook activity.

This will reportedly all be integrated into the next version of Skype. It’s unclear when that will be, or when any noticeable changes from this partnership will be visible on Facebook.