Mozilla has officially released Firefox 10. The new version of the open source web browser includes a handful of improvements and new features. The browser’s built-in tools for web developers got a particularly significant boost in this release. The new version also offers better support for a number of web standards.

The red panda is in double figures: the browser developed by the Mozilla Foundation is in fact now in version number 10 , as the software company also announced on the official website of the project. This is an absolutely unpredictable twelve months ago, when the stable release of the application was stopped at the 3.x branch of some problems in the development phase were postponed the launch of the fourth release. 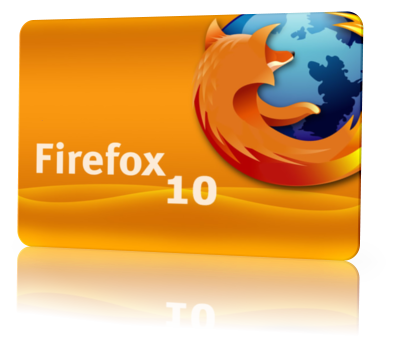 The browser of the red panda, therefore, continues its run to regain the position lost in the championship with his foot firmly on the accelerator, turning out new releases in the short distance to try to bridge the gap accumulated over time. The work by the developers is therefore visible in Firefox 10  ( download ), although few significant innovations and present are primarily aimed at solving a series of problems just born with the increase in rate of release of the application.

In this sense there is a different approach in the management of add-ons, true point dilemma of post-installation of a new major release because of possible incompatibilities with the baked Mozilla labs. Firefox has 10 Therefore the aim of offering users the chance to use it without any problem previously installed extensions , enabling developers to also have more time to ensure full compatibility. New APIs allow then to make web-app can work in full screen , while some improvements to WebGL perform better than before.

The list of changes included in the latest version of the browser contains a number of bugs and correct malfunctions during construction by the Mozilla team to make the application more secure and reliable. He then goes on the path that leads in the direction of greater adherence to web standards in the future, such as HTML5 and CSS3, with new features that now the browser is capable of supporting. Also available is a release enterprise dedicated to the corporate world, where a refresh rate too high can cause many problems.