Mozilla Firefox 8 grabs 35% of traffic in just one week, after latest release

Mozilla’s latest version of it’s popular Firefox web browser saw rapid adoption following its release last week. Firefox 8, the fifth major release of the Mozilla browser so far this year, became available for download on November 9th. Within one day, the new iteration had already grown to account for 7% of all Firefox traffic across Chitika’s ad network, the company reported on Tuesday. By the end of the browser’s first week of availability, Firefox 8 claimed 35% of all Firefox traffic. 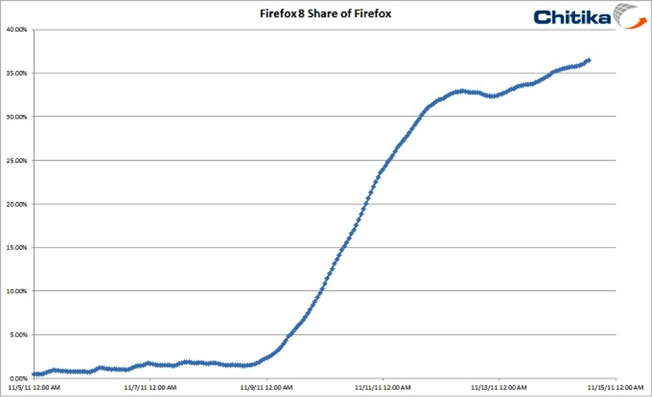 “This is yet another testament to Mozilla’s recently adopted rapid release process, particularly made evident by the fact that first seven versions of the browser took seven years to release,” Chitika’s Gabe Donnini wrote on the company’s blog. “Firefox 8 is a well-polished version which builds off of the functionality offered by its predecessors, and brings a whole slew of new features to the table.”

As of the end of October, Firefox was the second most popular web browser in the world according to data from Net Applications, claiming 22.52% of all web traffic. Microsoft’s Internet Explorer remained the world’s top browser with a 52.63% share.

Firefox for Android Is Growing Up very Fast