KOREAN electronics giant Samsung said recently that it would launch its iPad wannabe, the Tab, on all four major US cellphone carriers, boosting the device’s chances of success in the key US market.

So far, Apple’s iPad tablet computer has had the market virtually to itself since its launch in late April, selling some three million units in 80 days. 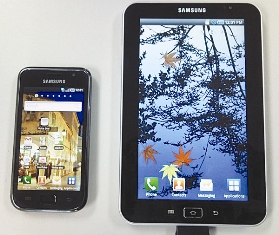 Samsung’s Tab runs on Google’s rival operating system Android, and is the first device that analysts say presents credible opposition to the iPad, which proved there was a market for the intuitive touch- screen interfaces that small tablet computers allow.

Samsung did not announce pricing details for the device, which with an 18cm screen will be 10cm smaller than an iPad.

However, prices will likely be heavily subsidised by the US carriers, much as they subsidise mobile phones to customers who commit to lengthy contracts for air time.

Samsung’s Tab will also weigh just half as much as an iPad, and will come with a car dock to allow on-screen navigation.

The device is as comfortable to use standing on a crowded train as it is relaxing on the couch at home, said Omar Khan, Samsung’s chief strategy officer in a statement announcing the launch.

The design makes it completely pocketable in your pants or jacket.

The device is the first of an expected wave of tablet computers powered by Android, which according to a report by Gartner research, will surpass iPad sales within three to four years, just as Android-powered phones are overtaking the iPhone.

Another major challenge to the iPad will come from Motorola, whose chief executive Sanjay Jha said will release a tablet computer early next yea