Over the weekend, exclusive Apple blog 9to5Mac discovered in a local Beverly Hills, California newspaper that Apple co-founder and CEO Steve Jobs will receive the “Lifetime Achievement in Technology” honor at the 40th anniversary Visions Awards on September 23rd. Industry speculation merits the award recognition towards his vision to achieve a touchscreen interface with the iPhone, iPod touch and iPad that can read onscreen text and verbally describe items underneath a person’s finger. 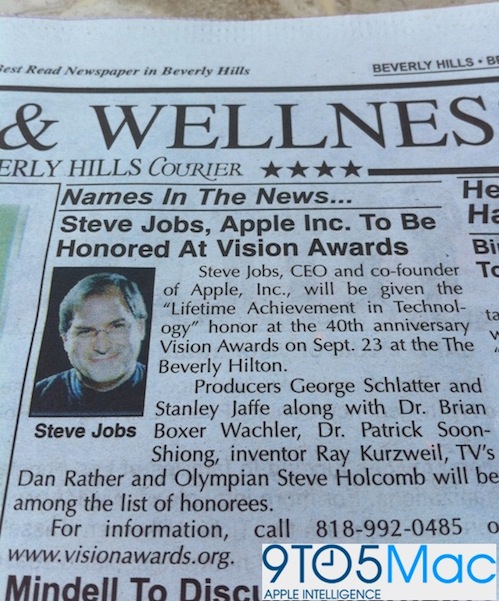 While this surprising announcement may be a tough pill for some to swallow,  this is not the first time Jobs has received a recent prestigious honor. In November 2009, the Apple co-founder was given the title “CEO of the Decade” by Fortune Magazine and was successively named “World’s Most Valuable CEO” by Barrons in March 2010. In the same month, Apple as a company was declared “World’s Most Admired Company” by Fortune Magazine editors. Jobs also landed the top position on Fortune’s July 2010 survey report “The 50 Smartest People in Tech” as the smartest CEO in the industry.

Apple has been on Fortune’s top list for the third consecutive year, and the Time Warner-owned global business magazine has consistently named Steve Jobs as their most valuable player for quite some time. Nevertheless, the Vision Awards in Beverly Hills grant recognition to “pioneering visionaries” in the field of music, movies, TV, technology, medical research and leadership. We look forward to hearing the award panel’s stringent qualification requirements for justifying Steve Jobs’ latest personal achievement.

The awards will be held on Thursday, September 23, 2010 at the Beverly Hilton.