The UPS guy handed me my new iPad just a few hours ago, and yes–the jumbo-sized screen is as glorious as they say, and I was shocked by how good HD videos looked. But I was also surprised by how heavy the iPad feels, and if you were hoping to read e-books all day under the clear, bright blue sky, well…bad news, folks. These and more iPad surprises, coming right up. 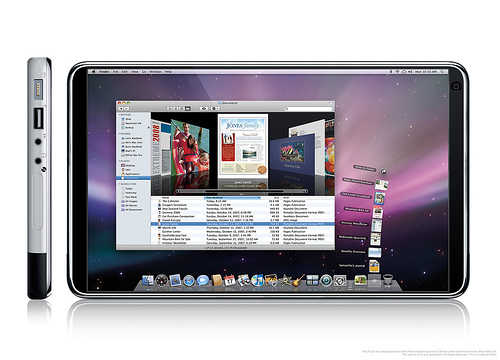 1. It screams
The early reviews all said that the iPad was “wicked fast,” and boy, they weren’t kidding. Applications literally fly open, and browsing the Web on Safari is way faster than on the iPhone. I could get used to this.

2. It’s heavier than I thought it would be
One-and-a-half pounds sounds pretty light, especially when you consider that the flyweight MacBook Air weighs in at about 3.5 pounds. That said, the iPad felt surprisingly heavy the first time I hefted it—not so heavy that I’m bursting a blood vessel or anything, but I’m curious to see how it’ll feel after an hour or so of reading an iBook, what Apple is calling the e-books you can download onto the device.

3. Good luck reading e-books in direct sunlight
Yes, the iPad has it all over the Kindle when it comes to its eye-catching color screen and sleek page-flicking animations. The beauty of the Kindle’s black-and-white e-ink screen, however, is that text stands out quite nicely when you’re reading in the sun; on the iPad, however, the color display looks disappointingly washed out in direct sunlight, problematic for reading e-books poolside.

4. Virtual QWERTY keypad isn’t as bad as I’d feared
No, it’s nothing like typing on a real keyboard, but for me, the iPad’s virtual QWERTY keypad isn’t nearly as terrible as many had warned. I’ve managed to bang out a few decent-sized emails on the thing, and it’s certainly better than typing on the iPhone. The key, I’ve found, is to relax and let the automatic error correction do its thing; if you keep hitting backspace to fix your errors (and there will be errors, trust me), you’ll be tapping all day. That said, keep in mind that to type on the iPad, you must do one of several things:

Prop it (awkwardly) in your lap to type

Hold it in one hand and tap with the other, effectively slashing your possible WPM

5. Can’t charge iPad over a USB port
First I tried it on my USB hub, then on the powered USB port on my MacBook Pro, but nope…no juice—not even when the iPad’s syncing with iTunes. Looks like the only way to charge the iPad, apparently, is using the included AC wall adapter. Good thing the iPad’s battery is rated for 10-plus hours.

Update: Actually, according to Macworld, you can charge iPad via a high-power USB port, but for low-power USB ports (something that an “older Mac, most Windows PCs and most USB hubs” don’t have, Macworld notes) the iPad will only charge (“slowly”) when it’s asleep. Still surprising in my book, but apologies for the error.

6. HD videos look amazing
Practically the first thing I did after unpacking the iPad was queue up the 720p trailer for “Avatar,” and…whoa. Absolutely gorgeous. Watching movies on the plane will never be the same again.

7. Reflections on the display are pretty distracting
The moment the wife and I were done “oohing” and “ahhing” over that “Avatar” video, we started complaining about our reflections in the iPad’s glass display. It’s not bad at all when you’re surfing or composing email, but if you’re watching a movie—and especially during a darkly lit scene—prepare to see your reflected self looking back at you. (Yes, the iPhone’s screen suffers from glare, too, but at least I couldn’t see my entire head reflected in the glass.)

8. Location-based services work fine in a pinch
One of the problems with the Wi-Fi-only iPad versus the upcoming 3G-embedded model is that it lacks A-GPS, a system that combines satellite data with cell-tower triangulation to pinpoint your location, even when you’re indoors. That said, the Wi-Fi-only version can still attempt to find where you are using nearby Wi-Fi signals, and I was impressed when my new iPad immediately zeroed in on my apartment, within half a block. Not bad.

9, The iPad makes calls, with a little help from Skype
Yes, Apple had promised that “almost” all iPhone apps would work on the iPad, but I had my doubts about Skype. Today, though, I was finally able to put Skype on the iPad to the test: I loaded it up, logged into my (for-pay) Skype Out account, and dialed 777-FILM. The next thing I heard? “Hello, welcome to Moviefone! If you know the name of the movie you want to see, press one now!” (Of course, this would all be a little more amazing if the iPad had a front-facing camera for video calls.)

10. My iPhone seems really, really small now
After testing the iPad for about an hour or so, I went to check my iPhone for a second and…yikes, what is this tiny little thing? So puny!