Microsoft Corp. is trying to make Hotmail cool again.The free Web mail service soon will be switching to a new approach that Microsoft hopes will give Hotmail an edge over rival offerings from Yahoo Inc. and Google Inc.

The upgrade, expected to be available in July or August, will automatically sort incoming messages into different categories devoted to users’ key contacts and Internet social networks. It will also provide previews of incoming photos, videos and other material without having to open an attachment or click on a link. 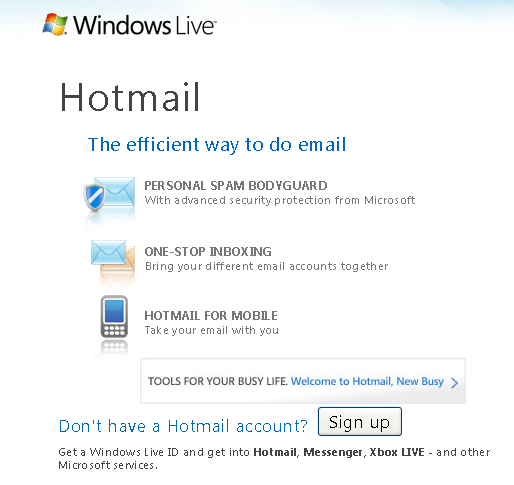 Other tools are being added to make it less cumbersome to send photos, videos, documents and other attachments to e-mail recipients. Another tweak is supposed to make is easier to sync Hotmail on mobile phones.

It’s all part of the most extensive overhaul to Hotmail since Microsoft bought the service 12 years ago, said Chris Jones, a Microsoft executive who is overseeing the renovations.

“Our service wasn’t doing the best job that it could,” Jones said during a Monday preview of the makeover.

The new features are supposed to enable people to spend less time managing their inboxes and more time enjoying and digesting what’s in the messages.

Microsoft is hoping the added convenience will help overcome the perception that Hotmail was growing stale as Google and Yahoo added more bells and whistles to their free Web mail services.

Even as it made relatively few changes, Hotmail remained the world’s most used service with 360 million users, according to statistics complied by comScore Inc. Yahoo ranks second globally with about 284 million users followed by Google’s Gmail at 173 million users.

Now Microsoft thinks it might have shot of supplanting Yahoo as the top Web mail service in the U.S. (Yahoo’s e-mail service has 95 million U.S. users compared to 47 million for Hotmail and 43 million for Gmail, according to comScore).

Hotmail’s most significant changes will provide new ways to look at photos and videos sent through e-mail. Microsoft expects this feature to be particularly popular because it says 55 percent of Hotmail’s storage is consumed by photos sent as attachments.

The new technology will detect when an e-mail contains a photo attachment and automatically display a thumbnail of the image (or images) at the top of the message. Hotmail will provide similar previews when it detects links to photo-sharing sites Flickr and SmugMug or to video-sharing sites YouTube and Hulu.

Other changes are designed to make it easier to send photos, video and other Web content. A new insert bar will allow users to send up to 10 gigabytes — about 200 photos each containing 50 megabytes — by uploading them to Microsoft’s free online storage service Skydrive, where they can only be viewed by the recipients of the e-mail.

Videos and other Internet material can be found through a new panel that will connect Hotmail to Microsoft’s Internet search engine, Bing. The videos and other Bing-generated content can then be inserted into an e-mail with a mouse click. The e-mail recipient will then be able to see the video or other material without having to click through a Web link.

As it spruces up Hotmail, Microsoft also will try to make it more secure. Embracing a change recently made by Gmail, Microsoft is adding a so-called “secure sockets layer” (denoted by “https” before a Web address) that encrypts e-mail to make it less vulnerable to computer hackers.