WordPress 3.0 has just arrived on the scene — the thirteenth major 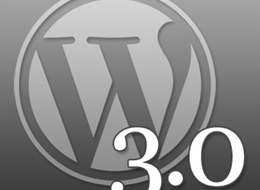 release of the popular blogging software. It’s the result of six months of work from a total of 218 different contributors. You can download it now or upgrade from within your WordPress dashboard.

What’s new in 3.0? One of the best ways to find out is to try out the new Twenty Ten theme, which shows off many of the release’s (which is also called “Thelonius”) major new features, including custom backgrounds, headers, shortlinks, menus, post types and taxonomies.

For a more comprehensive look at everything that has improved in 3.0 check out 3.0′s Codex page or the long list of issues in Trac. (We’re trying to keep these announcement posts shorter.) Whew! That’s a lot packed into one release. I can’t think of a better way to kick off the 3.X cycle we’ll be in for the next two and a half years.

Normally this is where I’d say we’re about to start work on 3.1, but we’re actually not. We’re going to take a release cycle off to focus on all of the things around WordPress. The growth of the community has been breathtaking, including over 10.3 million downloads of version 2.9, but so much of our effort has been focused on the core software it hasn’t left much time for anything else. Over the next three months we’re going to split into ninja/pirate teams focused on different areas of the around-WordPress experience, including the showcase, Codex, forums, profiles, update and compatibility APIs, theme directory, plugin directory, mailing lists, core plugins, wordcamp.org… the possibilities are endless. The goal of the teams isn’t going to be to make things perfect all at once, just better than they are today. We think this investment of time will give us a much stronger infrastructure to grow WordPress.org for the many tens of millions of users that will join us during the 3.X release cycle.